I think everyone has an “I tried to quit coffee” story. Most of them are suspiciously similar to quitting smoking stories. While I’ve never been a smoker, I have ridden the coffee struggle bus pretty far. So here’s my story:

I started drinking coffee to have something to do/somewhere to go when I ditched class in high school. What started as an innocent 8th-period-pick-me-up turned into a GIMME OR I DON’T DO DAYTIME habit—which I’m sure no one reading this blog is familiar with at all 😉

And then came the day, last year, when I stopped drinking coffee.

There’s not much else to the story, besides that I couldn’t get out of bed and had a splitting headache for a full 24 hours. But after that, I was fine! And you know what? After that initial day of misery, I actually found I had MORE energy when I avoided caffeine altogether. 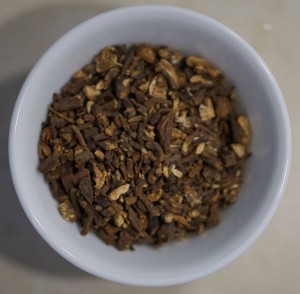 Here’s the roasted dandelion root by itself

I had read quite a bit about how coffee can contribute to adrenal fatigue and is just a general bummer for your overall health. I know there are articles out there that claim it’s good for you, but I didn’t like being dependent on coffee to the point where I even had to have a cup in the morning when I was camping.

I will admit that I still have the occasional cup of coffee, but I save it for outings with friends. And for those days when I just miss the taste of coffee, I make this dandelion root latte. Dandelion supports the liver, and when boiled, the roasted root is the closest coffee substitute I’ve ever tried. Plus it kind of smells like chocolate cake.

If you’ve never made roasted dandelion before, buy a bulk bag of it (I got this one on VitaCost) and follow the instructions below to roast it. The initial roasting takes a few hours, but the end product has a shelf life about as long as tea—so it’ll last you a while.

Note that this is NOT, however, the same thing as dandelion tea!

Before & after: the image on the right shows how dark the liquid will be after simmering